Well here I am at our Trieste outstation since writing you and I have had a very interesting week indeed. I have received your letters of nov 12th telling how you celebrated the signing of the armistice. That was a very clever stunt to burn the Kaiser in effigy. Personally I didn’t celebrate very much except perhaps by drinking a little extra milk, for at that time I was held to bed and soft drinks by the “Flu”. You are altogether too hopeful about me coming home for here it is a month later and there seems no further development. I think however in all probability that February will see us all there.

I brought a garage party up to Trieste and we had a wonderful run. First through the battle grounds of the Piave over the district interesting us from the June battle. Then the long stretches of poor Austrian roads until we came to the old battle ground of the “Carso”. I never saw such a desolate place. Imagine the rocky gravelly hills of Northern Ontario devoid of trees and covered with huge holes and you will see in your mind the “Carso”. You ought to see the Italian rear defense lines that they never had a chance to use. They are made of solid cement like long corridors with tiny firing holes. There are lines and lines of them and they will last forever as an imperishable record of Italy’s great war. When we got on farther we came upon glimpses of the Adriatic and finally in one place after we had been ascending for miles and miles we suddenly came to the edge of a cliff with the sea right beneath us. The sun was setting as we arrived there and started to descend. How I wish you could have seen it. It is impossible to describe a sunset but this one equaled any I have ever seen.

We descended slowly always in view of the sea dotted with sails of fishing craft now daring to come out and ply there trade and here and there a small coasting steamer like the Tacoma Vaughn ones. We came into Trieste at sunset and found our way over rough pavement stone to our villa we are happy to say for tea.

The villa we are in overlooks a big brewery and was built by its owner who evidently preferred to keep an eye on his business to having a beautiful site for his home. It is on the side of a hill away from the sea and it only gets about two hours of sunshines a day. I don’t understand how a man rich as this one must have been judging from the villa, could live in Trieste and not have hardwood floors throughout. The hall is paneled with hardwood and all the rooms have the usual Italian ornamental but rather useless stoves. There is a tennis court but no balls, rackets or net. There is also a bowling alley which we find a use for sometimes.

The main attraction however is going down town. Myself and another chap called Sykes thought we would go to a variety show the other night. The prices were very cheap so we got reserved seats. We got in and found that in all there were only six reserved seats and they were all taken and many other people were waiting till the performance finished to slip into them, so we came out. We say the funniest part however which was the prompter who told everybody everything to say. We finally got into a movie which was stuffy when we went in and got stuffier and stuffier until we finally had to come out.

Then there is the caffe Nuova York to go to in the evenings. There is always a band playing in the evenings and they play fairly good music. You ought to see the shoes in the shop windows. There are leather ones but they are rather for the very rich. The common people content themselves with at most leather soles and cloth uppers. Most of them are made with paper soled and they sell little buts of leather to nail on the soles and heels like we to rubber heels. The prices of all necessary things are exorbitant. Eggs when we first came here were 5 corona apiece which even at the present value of the corona is about 30 cents. Unnecessary article are not so terribly expensive as they have had very little sale for the past four years.

Do you know what the Deutschland carried when she came over from Germany to America? She brought over gold to make her credit good with the States and took back for the larger part of her cargo, rubber gloves for surgeons. Before they had had to do without but enough came through with the sub to see them through.

We are debating among ourselves what ought to be done to an English citizen brought up and educated in Austria and of Austrian sympathies who when war broke out enlisted and became Austria’s crack air pilot. He is here now in Trieste waiting to know what they will do with him. Cesare Battisti was an Austrian citizen of Trieste who fought for the Italians, was captured and hung in the castle of Trento by Austrians. Now he has become a great Italian martyr. Will the same fate happen to the English Austrian and if so will he become an Austrian hero? I think not for Austria as Austria is not more and there is no more need for Austrian heroes.

Well I must close. It is very hard writing these days for I always want to put it off till I see you. However as that may be some time I will keep on yet. I hope you have all had a very happy Xmas and here is love to you all. 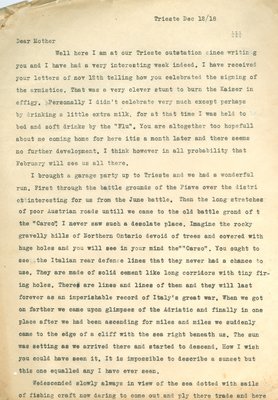