Or do you spell your name with two n’s. I must look and see in your letter that came this morning. Two n’s. I am wrong and humbly beg your respected pardon and next time I will try to remember. It was very cheering to get yours and mother’s written Oct 27th especially as the last few days have been rather boring. I am sufficiently recovered from the “Flu” to be able to get up all day now but I still have to have my breakfast in bed and I cannot possibly think of doing any work as of yet.

I deplore the fact that I have nothing to write about, but for the last few days I have done nothing but get up, walk slowly along the road or climb the smallest of our hills, then eat lunch and have another walk after. Tea is at four and after that it is dark. It snowed yesterday for an hour and a half and I almost thought we would have a little tobogganing, but no, when I woke this morning it was all gone and the country was left muddy instead.

Some of the members are leaving the unit now the war is over. P.J. Baker left this morning and everyone was indeed sorry to see him go. He came out with the unit and was directly responsible for it’s existence, and owing to his energy is much of the success that it has had. Then Mr. Page and Mr. Henderson left with him. Paul ought to know them both especially Mr. Page. He is the oldest member in the unit and we might say one of the youngest in spirit. You should have seen him yesterday when he came down to V.T. to get ready to go. He stoops and walks with a halting gait all his own. His breaches and tunic looked like a checker board owing to horrible grease and oil stains. He was worrying much over the fact that his better tunic would be too small to slip over his vests. He wears at least three on all occasions. I went for a walk today with the housekeeper to bestow some rice and bread on a little family in rather destitute circumstances. The mother had two sons and one had been killed in the war and she hadn’t heard from the other in months. Then just the other day the las son suddenly without warning game home on leave from France where he had been gassed. Imagine how happy they were although they had practically nothing to eat in the house except polenta and their clothing was insufficient for the cold weather we were having. They insisted on giving us a return present of a plat of huge chestnuts and we had to drink a glass of their excellent vino.

Just think, a month from today is Xmas. I had almost hoped to be home for it but now I fear it will be another in Italy for me. Our work now consists of carrying sick and wounded returned prisoners coming into Trieste. Conditions there are beyond words. The commandant visited a Colonel of the prison camp and he happened there just at meal time and the only meal of the day. The Colonel was eating a dry biscuit and drinking a glass of water. I don’t know what the men were eating but it sounds terrible doesn’t it? They say they are literally dying by the thousands every day.

It seems to me one of the greatest tragedies of the war that, after keeping body and soul together for years, they should meet such terrible hardships in the hour of repatriation. There is need in Europe for every ounce of food that can be procured and I fancy it will be up to Canada and the States to do what they can, for Russia the other great food producing country in the Bolsheviks is not as reliable as it might be. I see by the paper that America is sending at once 200,000 tons of foodstuffs for Northern France Belgium and Austria. Then I hear that outside of Trieste three food ships were sunk by mines in the past few days.

We have two Italian girls working for the unit who have been with us practically since the beginning and who came from the little town of Dolegnano near Villa Trento. Two days ago one of our cars took them home for a few days. They are back now and they give us some idea of the things the people had to put up with in the past year. They were deserted by the priests in the beginning but soon after one with an extraordinary personality turned up from another region of comparative immunity from the invaders, and it was from his strength and helpfulness that many were able to stand up under the yoke of the oppressor. They had intimidated the inhabitants so much that they would give them anything they asked. No time was sacred to them and they were accustomed to enter a house at any hour of the day or night, point to a thing that took their fancy and it would have to be handed over to them forthwith.

Thanks for Bill’s account and photo in the Globe. It sounds well and would sure make a hit with the people at home, but here it only sounds rather silly as practically all the statements are absolutely untrue. We are still waiting news why Bill was sent for in such a hurry. I am sorry not to have seen him before he left but it was so sudden. After all Bill has been a pretty good sort and we have seen quite a bit of Italian experience in the same places. You will probably see him before I will. Tell him I regret not having said good-bye to him and that I came down to the sick-room a day or so after he had left.

I also got letters today from Lucy, Eva B., and Clara Sellens a friend of Edith and me in Hamilton, and cards from mother and Aunt Ede written about the time our offensive started. I am awfully anxious to get your early and middle November letters and hear your comments on the Armistices. I hope that you never labored under the impression that, our armistices being signed on the 4th, we would be starting for home on the 5th or at the latest the 6th. Ambulance work it seems still goes on while there are armies in the field whether it is a state of peace or war.

I should very much like to see Annie teaching George Sheppard the multiplication table and Cecil Smith how to spell multiplication. Tell her so and congratulate her on the perseverance that I know she must have.

I fear I have not written to Pearl very often but I know she gets all my home letters to read so it will be practically the same. According to all accounts they have been very busy haven’t they? I am glad that you and Henry have gotten on so well together but I suppose you will be having a divorce for the really cold weather, what about skating? The cold snap here makes me think of it and wish that I were going to have a seasons ticket to get more than my money’s worth out of. I’m hoping to be able to be home in time to go to Toronto and take Pearl for a skate in some artificial rink which won’t be unkind enough to close before April.

I’m still busy using up my Austrian note paper but I think I won’t offend your sights with the same sort of brown envelopes that I used last time. Instead I will try a regulation Italian.

I’ve just been presented with a thermometer to suck for a few minutes. The nurse usually goes off and forgets about it for at least half an hour. I hope not this time for it is nearly dinner. I think for that reason I’ll stop this rambling train of thoughts and hope that it reaches you in time for Xmas day. If not you can take it to wish you all a Happy new year and many more of them. Allan 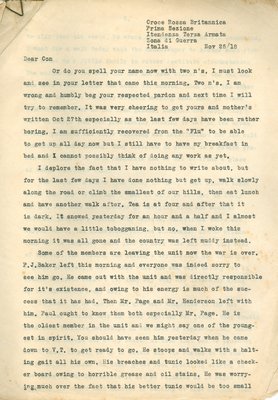