I was much rejoiced to get two letters this morning, one from mother dated Oct.15th and written from Toronto and another from you and her for the twentieth. They came in just about the right time.

Sometimes I get them in a little over three weeks but then there is always a longer wait until the next one.

Isn’t it great to have Murray home again and what good luck for him to arrive just when he did. I expect he would still be home when the armistice news came out. He deserves all the good luck that he can get now after the two years that he has been out there.

It will be rather interesting for you to know that this is Austrian note paper that I am using. We got into a house during our advance, (not broke in, only billeted) and of course considered Austrian stationary fair loot. I am recuperating at Villa Trieste now and they say I may try a walk outside tomorrow. It is most exasperating to be ill at this time but the chances are that I will be around and at Trieste within a week.

The Italian prisoners taken by the Austrian are being repatriated now and some of the scenes are terribly pathetic, and you in a land of plenty have no idea of some of the hardships that have to be put up with. We meet hundreds on the roads that have walked from Austria and are footsore and have been without food of any sort for days. In Trieste they are coming in in train loads, there is no food in the city and no transportation adequate either to take them away or to bring food to them. In one case that I know of they had to put a lot of several thousands under a guard or machine-guns to keep them from breaking out and looting the town. Austria fought literally till she was all in. When we were being brought down in the ambulance we passed many batches of prisoners without guards who had come over in the hope of securing at least a prisoners ration of food. Some of them were driving carts and wagons drawn by the shadows of horses or mules. Honestly I have never seen horses in such a stage of starvation. The skinniest cab horses that you could imagine had nothing in it with these. It is pathetic to see half-starved prisoners lining the roads but to see a procession of wholly starved horses just managing to get along under the guard of a huge prancing British cavalry horse in the primest of condition is much more pathetic.

I collected a number of souvenirs but owing to my illness I have left them all in various places between here and the Tagliamento and my hopes of seeing them again are pretty slim. When the Austrians captured the Venetian plain they issued a paper currency neither Italian nor Austrian but good only in the conquered provinces. I was carrying a Besagliere soldier one day and he produced a whole roll of these notes from 1 to 20 lire. I asked him where he had gotten them and he very expressively pointed to his bayonet at his side and I was left to infer how some poor Austrian soldiers had been intimidated.

All the Austrian trucks have iron wheels owing to the scarcity of rubber but there weren’t many left behind for us to see what they were like. Only a few that broke down and most of them were burnt. We captured some Austrian gasoline and of all the awful stuff that we ever used it was the worst. Some of the cars absolutely refused to run on it and those that it did didn’t act very healthily.

They say that one has to pay one hundred dollars for a pair of boots in Trieste. How is that for the high cost of living? And aren’t you sorry we aren’t Austrian subjects living in Vienna or Budapest? I expect that foodstuffs are along the same line. I know that an Austrian Italian speaking lieutenant with whom I was talking to the other day said that there was almost nothing to eat in Austria. He wasn’t sorry to have the war over and said that very few of his compatriots were either.

You have had an epidemic of influenza haven’t you, I am almost afraid to open your letters, nearly every one seems to contain news of somebody very ill with or dying of something. Your business news looks and sounds good and I expect I’ll be home for the spring and summer work and that may possibly be an advantage. I have developed such a degree of dislike for work that my return to it may not be such a success as imagined.

Mother remarks that she fails to see numbers on my letters and it is much too late to start now. Besides there being no danger from the submarines, there is no excuse for them no arriving and in extra good time too.

Oh: I had a letter from Virgil, he has evidently had the “Flu” I also had another from Maude Davidson telling me all the Calgary news, then another from Aunt Cynt so I don’t think that I have done badly. I also got a parcel from Elecia Smith with a pair of socks towel and cake. The cake was really remarkable but I think it has made me a little worse.

Well I will close this note. I wrote mother yesterday and my writing you today is helping to make up for my long period of neglect now happily over. Love to all Allan. 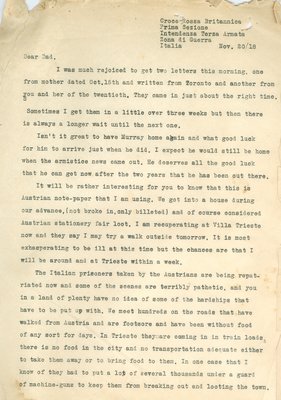