Finally at last I have gotten down to writing you. I am more than consumed with remorse for my neglect for the past three weeks and I can imagine how you would feel on opening one of my big envelopes and finding a scrambled card instead of a letter.

It is just two weeks since the Spanish Influenza flew over from Spain and caught me just after we had reached the Tagliamento. We had a lovely villa where had been an Austrian command and an officers bath house, lovely furniture and fine beds all left by the Austrians and luxury of luxuries for an Italian house, a little iron stove in every room with a limited supply of coal in the house. A fine sun parlour caught the sun from morning till night and there was a fountain continually playing in the garden.

Well as I was saying, two weeks ago I caught the “Flu” and today is the first time that I have been up and I am taking advantage of it to write to you. For ten days they fed me nothing by milk and Bovril but now I am well on my way to recovery and am taking a bit of everything. It seems that the “Flu” is serious when complications especially of the lungs set in. I had catarrh and am still a little stuffy and dull about the head, however that will soon pass away and I expect to be back at work in a little over a week.

I expect the Italian action has made wonderful reading in your papers and you will be almost beside yourselves at the German news. I fancy the headlines in the Globe and Spec. You must be sure and forward some of them to me.

Our action started with a tremendous bombardment on the anniversary of Caporetto day. It went on all night and we attacked at dawn. There was no holding the Austrians and the second day we were able to put two Ford ambulances over the Piave. The next day I followed them with the 77 and was the first big ambulance to operate beyond the river. I had an awful time getting across the river. There was endless traffic and in some places mud unspeakable. I tied ropes around my wheels and somehow managed to get through. The bridges were wonderfully well made on pontoon but the approaches were awful. I had to ford two streams and got my car washed well in the process. The worst of the road was beyond the river in a narrow lane which had been perfectly cut up by our artillery two days before. I got stuck once but with the shoving of many soldiers who were in the mule train that was following me, I managed to get through all right and arrived at our station long before anyone was expecting me.

The next day we went further into the country as the Austrians retreated. You can’t imagine the delight of the inhabitants as their country was freed from the invader. At every town we entered the people crowded around us and shouted and laughed and cried. In once rather larger town the people headed by some of our Bersagliere friends cheered us and shouted Viva l’Ingliterra to which of course we had to return “Viva l’Italia”, and so it went on till we could hardly get out for the crowds of people.

I have had a number of all day and all night stunts but I think the most trying an most eventful was the night after I crossed the river and Rogers and I started out to get four wounded British Tommies who were somewhere across another little river whose bridges had been blown up. We took my car and a Ford and hastened to where we knew there was a tiny bridge just improvised. We crossed but a mile further on the road became impassible on account of a surface of a foot and a half deep with mud. To add to our troubles we had a puncture. We finally got back and got to another bridge but we couldn’t cross there because they were bringing over artillery and they told us that perhaps in about four hours we might pass.

I can hardly describe the sight of the horses and artillery wagons passing that stream. You have to have an Idea of all the streams and canals that intersect all of the Northern Italian plains. They are deep slow running with ten-foot high dykes on either side. Well when the bridged are broken they have to make roads down the side of the dykes and pontoon bridges over the streams. This is what they did in this case, then sent the guns across, and Oh; what a sight it was. Dozens of men running from one side to the other carrying great pitch torches. The gun-teams going warily down the near side with straining men holding back the carriages. Then across and now comes the strain. They hitch on another team of horses and with a great shout and lashing of whips they start up the other side. Every second team sticks in the mud at the beginning of the slope, and then dozens of me get behind and there is more shouting and waving of torches and away they go and finally work their way to the top.

While we were watching this and waiting out turn P.J. Baker came along and took the matter into his own hands, shoved the Ford across and got the four wounded British. We carried them across the stream and I tell you that I do not envy the stretcher-bearer his job. Rogers and I took them to the bank of the Piave in the wee small hours of the morning. We got into the ditch once. I stopped once only six inches from a dropping off place made by a twelve inch shell. And another time we landed squarely into a shell hole and got out only by Roger’s excellent shoving. I forgot to tell you that the reason of all the hair breadth escapes was because I had run out of carbide and thus had no lights.

In another place we had to clear a hospital of Austrians which had been deserted by the doctors and everyone connected with it. When we arrived we found it had been taken over by a number of Italian young ladies living on the neighbourhood. Very capable they were and it was certainly courageous of them to take it over from the fleeing Austrians especially as a sort of battle was raging in the town.

The Austrian medical corps weren’t all like that however and we found in another town a hospital of over two hundred beds where the captain and lieutenant in charge had remained behind with all the orderlies and they were practically without supplies. Not a very enviable position to be in and one not improved when finally the Italians did take it over.

The Austrians certainly took everything they could during their years stay in the conquered provinces. In the towns there isn’t a store that has any merchandise. There isn’t a particle of food except what private people have stored against the Austrian commands. In the country the grain has been commandeered but the people have reserved enough for themselves. Where houses have been found empty they have been stripped to the last bit of furniture. All the church bells have been seized and sent to the interior for metal. I only know one that hasn’t and that one was hidden. The Austrians left that particular town at four in the morning. We were in it at noon and the bell was violently ringing out it’s rejoicings and we were eagerly shown a bent lamp post where a civilian had been hanged for some misdemeanor and left hanging there for some days as an example to others.

One doesn’t hear much of the Austrian atrocities practiced on the inhabitants. The most common soldiers say they weren’t so bad but deplored the war as we deplore it and wished to get back to their homes.

Since I have been sick the changes in the stations have been remarkable. The armistice came right before and you can imagine the rejoicings. It came just at the right time for public opinion after a big military victory. The day after I was sick we moved to Gorizia then on account of something or other we moved back to our old Villa Trento. They say that it has been pretty well stripped of everything that we left there and that the wooden floors have been torn up and taken away. Then there was the biggest move of all when we sent an outstation to Trieste and there were rumors of our moving our H.Q. there. However the news of the German armistice knocked that and now the latest rumors are that we will stop functioning on the New Year. That may mean that we will leave for home about the beginning of February. I don’t think there is any chance of your seeing me before the first of March but then you never can tell and with the Germans really beaten and armistices signed all around we may break up sooner.

Billy got a telegram calling him home on account of his mother. We can’t really think what it would be unless the “Flu”. But Wilf and I feel sorry for him and we neither of us had a chance to see him before he left which was rather too bad. I got Con’s letter of Oct. 13th some days ago and today one from Edith dated Oct 17th and telling me all about Murray. What wonderfully good luck for him to get home when he did. Now with the armistice there will of course be no need for him to go back even if the college course doesn’t turn out all that he expected.

Well I think I will close this letter for now. Love to all. 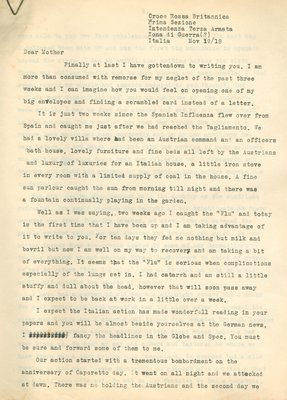