I’ve been spending my days worrying the War Office varied with an excursion down to the depot at Harwich to put my name in there, but the Kingdom of Heaven seems easier to get to then the front. The war office is simply besieged with officers of every age and kind.

Wilson gave me a letter to one of the military secretary’s staff. I succeeded in seeing him today and he promised me a majority in the New Army as soon as it can be gazetted, which means training recruits for the present till they’re fit to go out, but I don’t know which Regiment I shall get. They say I’m lucky, as most retired Majors have to go in as captains, but my having come over from Canada seemed to impress them, so I hope it won’t be many days before I’m at work.

Dined with Sybil last night. Godfrey B H is out at the front with the 14th Hussars and Edith Calverley’s boy with the Irish Rifles. I don’t seem to have had a minute to spare since I got here. I’m allowed to use the Athenaeum as a special favour from the Committee, but they are not supposed to know I’m in England so I’m sort of a club ghost. Got this card from Hugh this morning.

I just heard a mail was to leave this eening, so I’m catching it, before I go round to the War Office again to dig up more influence.

There’s now earthly chance of the Germans getting to England. Heaps of love to all,

Ever your loving Leveson 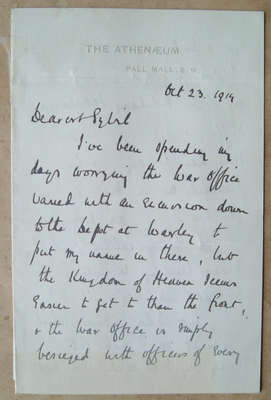