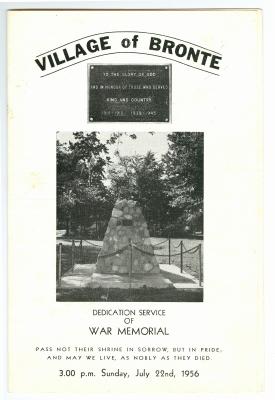 Village of Bronte: Dedication Service of War Memorial Details
The Old Cenotaph
The cenotaph located at the corner of Bronte and Lakeshore was built by the Breeman brothers, who lived in Bronte. They built the memorial and place the plaque in it, which reads:
TO THE GLORY OF GOD AND IN HONOUR OF THOSE WHO SERVED KING AND COUNTRY
1914 - 1918 1939 - 1945 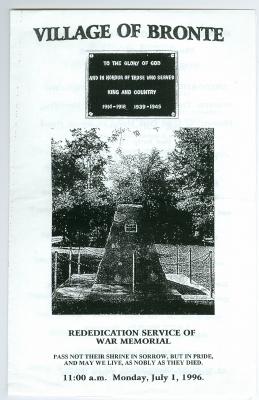 Bronte Cenotaph, Bronte Gore Park (2015) Details
The Story of the Missing Plaque
Before this rededication, there was a period of time when the cenotaph plaque was missing. Over the years the cenotaph had been vandalized and it appeared that someone had ripped the plaque out of it. The cenotaph was eventually refurbished and a new plaque was put in. 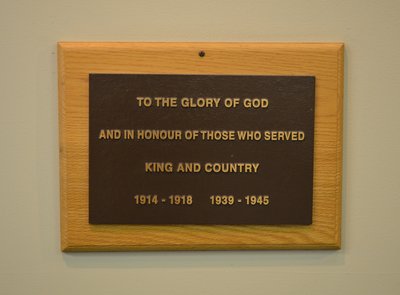 Old cenotaph plaque at the Bronte Legion Details
Three of four years later, according to Past President Gene Reed, a UPS driver found the stolen plaque on MacDonald Road in Oakville. He gave it to someone who owned a military museum in Oakville, who then brought it to the Legion and asked Gene if he knew what it was. To this day, no one knows how that plaque made its way to MacDonald Road, but it’s now mounted on the wall of the Club Room at the Bronte Legion. 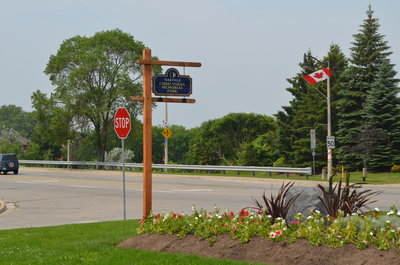 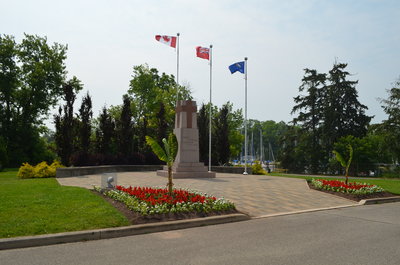 Cenotaph at Chris Vokes Memorial Park (2015) Details
Remembrance Day ceremonies take place at this cenotaph each year on November 11th. This cenotaph is dedicated to those who served in the First World War, Second World War, and the Korean War.

New cenotaph at Chris Vokes Memorial Park (2015) Details
The inscription on the front of the cenotaph reads:
A TRIBUTE TO THE DEAD
AN ADMONITION TO THE LIVING
LEST WE FORGET
Main Menu → Previous Panel → Next Panel
Powered by / Alimenté par