The grounds and immediate area, parking location for Vice-Regal cars and Party, should be completely free of all obstructions, snow, etc. In the event of a large crowd, precautions should be taken to assure the Vice-Regal Party of an easy access to the main entrance to the building. This could be accomplished by road barricades, ropes, etc.

2:05 Vice-Regal Party and escort arrive at project site. Parking area reserved and cleared for the Party. Oakville Citizens' Band will be playing suitable selections in an area immediately adjacent to the main entrance. The A.D.C. and His Honour will proceed from automobiles toward the main entrance. Outside of main entrance they are met by the Reeve and the Chairman and escorted to a small private room within the building so that His Honour may remove his coat, hat, etc.

NOTE: Immediately upon arrival of the Official Party the Master of Ceremonies will advise the audience in the gallery of procedure to be followed in honouring and welcoming His Honour.

NOTE: All platform guests are to be standing at their respective seats awaiting His Honour. All other guests are to be standing. His Honour will be escorted to his seat by his A.D.C. and upon arrival at his seat, the royal salute is played (first 6 bars of "God Save The Queen"). After the royal salute is played His Honour will be seated and all other guests may be seated thereafter.

The program to follow is a shortened version of the original program and is as follows.

2:20 Master of Ceremonies - Mr. William Walker – introduces self to audience, presents a very brief resume of what is planned, and then proceeds to introduce the platform guests- excluding His Honour and his A.D.C.- as well as other guests who will be seated on the right and left of platform.

2:28 Master of Ceremonies calls on Reeve Herbert Merry to welcome all guests and to offer special words of welcome to His Honour.

2:30 Master of Ceremonies calls on the Project Chairman - Mr. R. J. New - to speak brief words to guests outlining events leading up to construction and completion of this building - Committee activity, history and names of Committee members - must introduce them by name, and ask to stand.

- Chairman New introduces the architect and the contractor and asks them to stand and be recognized.

- Chairman New mentions fact that the building is multipurpose and that it houses our main Central Library, Gallery, and will eventually house the Recreation Commission's new swimming pool. This leads Chairman to introduce the Chairman of the Library Board - Mr. D.H.W. Bath.

2:35 Chairman of the Library Board, Mr. Bath, makes very brief mention of the function, contents, etc. of the new Central Library.

2:40 Chairman New remarks on the fact that many groups of citizens in Oakville have made contributions to the Centennial Building and reads list of donors, expresses thanks of the Committee and the Town to donors for their contribution. Chairman New then introduces Mr. Sidney Bonser, President of Procor Limited, Oakville, to accept our thanks on behalf of all donors to the Project.

2:42 Mr. Bonser makes suitable remarks regarding all donors to the Project.

2:47 Chairman calls on Reeve Merry to introduce His Honour. Reeve Merry introduces His Honour as follows: "Mr. Chairman, Ladies and Gentlemen - His Honour the Lieutenant-Governor of Ontario".

2:48 The Lieutenant-Governor will bring greetings to the Town and at approximately 3:00 His Honour will declare the building officially open.

3:01 Immediately following the Lieutenant-Governor, the Reeve will extend the thanks of all the citizens of the Corporation to His Honour for attending and participating in this ceremony.

3:05 The Master of Ceremonies thanks all for attending, makes appropriate announcements re inviting guests to tour the building, finishes by announcing the departure of the Vice-Regal Party.

3:06 Vice-Regal Party departs. The A.D.C. will precede His Honour, followed by the Reeve and Chairman who will escort the Vice-Regal Party on a brief tour of the building and will stay with the Party until His Honour decides to leave.

Departure from the building by Vice-Regal Party

- Following a tour of the building His Honour, escorted by his A.D.C., will retire to the private room and from there will proceed to his automobile. The Reeve and the Chairman will escort His Honour to the main entrance from which he will depart. Once at the automobiles, the Vice-Regal Party will proceed via escort to their destination. Provision should be made within the building to direct the general public on a tour route. This should be set out with directional arrows on which the words "Tour Route" are indicated. The Library staff will layout this route.

- It will be necessary that a room on the middle floor be set aside as a cloak or coat room for guests.

- Light refreshments will be served by the Library staff in a convenient area located on the … floor.

- It is recommended that staff be available to replace the current display in the gallery as soon as possible after the Official Opening ceremonies. 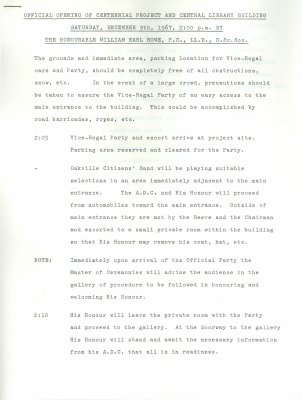