Official Party are expected to arrive at this building at 2 p.m. R. J. Cooksley will advise you when arrival takes place.

- Upon arrival, it is suggested that you advise your audience of the routine which will be followed during entry, etc. of Official Party.

- Once His Honour arrives at his seat, the royal salute is played.

- After royal salute, suggest you start as noted in program outline.

- After you have made yourself acquainted with the audience, introduce your platform guests. Ask guests to stand and remain standing until all have been introduced and ask audience to withhold applause. In seating order they will be as follows

Front Row on your Right:

- The next gentleman will be properly introduced to you later on in this program.

- The Reeve of the Town of Oakville – Reeve Herbert Merry.

Second Row on you Right:

- The Chairman of the Oakville Library Board – Mr. D.H.W. Bath.

- The President of Procor Limited, Oakville. And one who is with us today to represent the donors of gifts to this Project – Mr. S. Bonser.

- Our Member of Parliament at Ottawa – Dr. Harry C. Harley.

- A very welcome and honoured guest to Oakville – the Mayor of Dorval, Quebec – Mayor Sarto Desnoyers. [crossed out: With His Worship, and seated to my left (point) are Madame Desnoyers, Alderman and Mrs. MacDonald and Alderman and Mrs. Brault (pronounced Bro). We are indeed delighted to have these people from Dorval with us today.]

- Ladies and Gentlemen – your platform guests for today’s ceremony

- Following introduction of platform guests it is now your duty to introduce additional special guests who are seated to your right and to your left – suggest as follows:

- “It is extremely difficult for me to introduce to you all of our additional special guests who are with us today and who have taken time from their own busy schedule to be with us. May I introduce to you:

- The members of Oakville’s Council, seated on my Right (ask them to stand and be recognized)

- M.C. calls on Members of the Clergy of the Town of Oakville to say Prayers of Dedication:

(crossed out: - Father of the Roman Catholic Faith to read appropriate verses

- After these Prayers of Dedication, you should then introduce the [crossed out: Reeve of the Town of Oakville (representing] Mayor McLean Anderson) to speak a few words to the audience.

- After [crossed out: Reeve Merry] Mayor Anderson, introduce “a gentleman who was given the responsibility to guiding this building project to its completion – the Chairman of the Centennial Project Committee – Mr. Ryland J. New – better known to you all as Kelly New. Mr. New.”

- After Reeve Merry has thanked the Lieutenant-Governor – you again take over, as follows.

- Immediately following the playing of our National Anthem, His Honour and his party will be leaving this room to make a brief tour of the building. “May I ask that you remain standing after the National Anthem until His Honour and party have left the room, after which I will adjourn this meeting.”

- Ladies and gentlemen – the National Anthem.

- Lieutenant-Governor and party leave the room.

- MC thanks everyone on behalf of the Committee for being with us this afternoon, invite all to tour the building 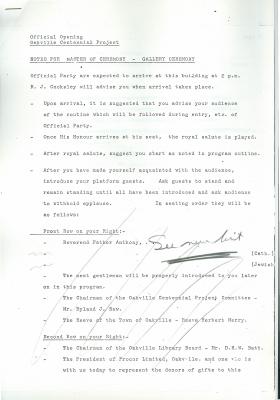