Esther Demeny Details
The Oakville Art Society was founded in 1965 with just seven members, plus Mrs. Esther Demeny - the founder and first president.

The idea for an art society in Oakville was dreamed up by Mrs. Demeny, an accomplished artist, who taught classes from her home. Mrs. Demeny found that she not only needed more space for her classes, which she held in her living room, but also wanted to offer other types of art classes that were different from her area of expertise.

Mrs. Demeny wanted to create a community space where art-minded individuals could come together to share and learn in the same space. With that in mind she started to make plans for what would become the Oakville Art Society. 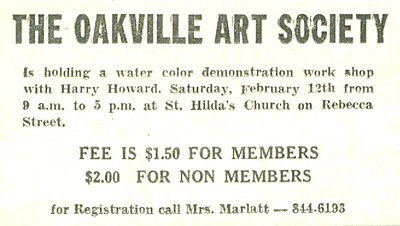 Advertisment for watercolour class Details
Newspaper Clipping: Mrs. Esther Demeny has an exhibit at the Woodside Library in 1964, one year before forming the Oakville Art Society. Pictured with her is local artist Thomas Chatfield who would become a member of OAS. 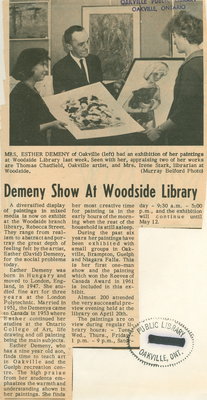