“Another East snow storm commenced this evening, and now while I am writing at 8 o’clock on Tuesday night, the wind is howling piteously, the snow is flying briskly, the Lake is raging wildly and Old Winter with all its treasures of snow and frost appears to be at hand. But yet for all these changes we should be thankful as they are all designed for the good” 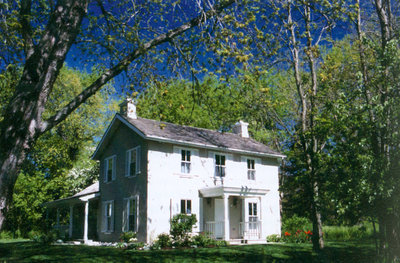 The Sovereign House Details
Philip Sovereign came to the Twelve (later named Bronte) from the New York area in 1814. Upon arrival, Philip purchased a plot of land from the Mississauga Natives along the western bank of the Twelve.

In 1815 Philip had the first log school house built on his property where his son, Charles Sovereign, would teach at the age of 17. As early settlers in the area, The Sovereigns, along with other notable families like the Belyeas, became directly involved with the shaping of Bronte as a town. 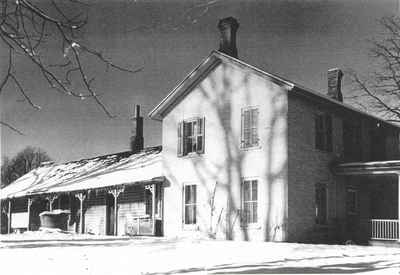 The Charles Sovereign House Details
Philip’s son Charles would continue to be a leader in the community by becoming Justice of the Peace. As a prominent and visible member of the community, Charles was suited to be part of the Bronte Harbour Company as the company's secretary (Brimacombe 7).

Individuals interested in the heritage of Bronte are fortunate to have primary sources from Charles Sovereign who kept a daily journal recording everything from daily events, finances, local news, gossip and Biblical verse (7). One entry mentions the Cholera outbreak in 1854 which resulted in many deaths (Mathews 237). Also noted in Charles’ journal was July 1st 1867, the day that Canada became a nation (Blair 18). For those interested, the journals are now housed within the Archives of Ontario and for those not wanting to make the trip to Ottawa; a complete duplicate can be found at the Bronte Historical Society. 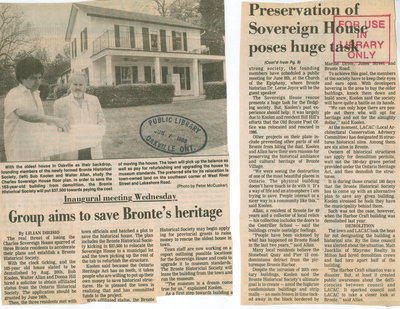 The Bronte Historical Society not only preserves local heritage but they also support local artists. Bi-weekly art exhibitions are held throughout the summer at Sovereign House. Sovereign House is open to the public from 1-4 on Wednesdays, Saturdays and Sundays. 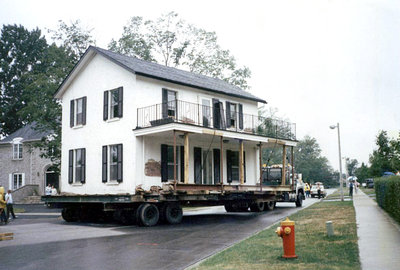 The Sovereign House on the move Details 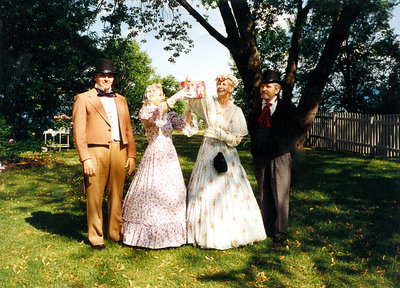 Mazo de la Roche Details
Fun Fact: Novelist, Mazo de la Roche and her family rented the Sovereign House for five years. Many of her novels and short stories were directly inspired by Bronte and its citizens as well as the surrounding area. In particular, Mazo's novel Possession contains many characters and events that were drawn from her actual encounters in Bronte.