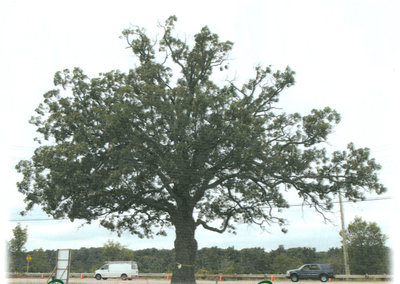 The Town of Oakville may be 150 years old, but one of its residents has been around a little longer - about 100 years longer.

The giant white oak tree on Bronte Road, across from the Halton Regional Administration headquarters building, has been around for an estimated 250 years.

Thanks to a citizen-led fundraising effort, which saved the tree from being chopped down for an expansion of Bronte Road, the giant white oak should be around for a few hundred more years.

The campaign to save an historic old oak tree soon caught the imagination of not only Oakville residents, but also tree lovers around the world. Residents of India, England, Ireland and the United States all heard about the threatened white oak and donated to the cause. Young children were even emptying their piggy banks to contribute. The tree received a major shot in the armer, branch - when an anonymous Toronto woman agreed to match any funds raised up to $150,000.

The TO Friends of the Environment Foundation donated $10,000. There were, however, a few bumps along the way. The original deadline to come up with the funding was December 2006. By that date, fundraising efforts fell $75,000 short. That's when MPP Kevin Flynn approached Ontario Premier Dalton McGuinty and Mayor Rob Burton and proposed the town, region and province split the final amount to celebrate both the tree and Oakville's 150th anniversary.

While some residents questioned the wisdom of the deal, Flynn's proposal went through. Extra fundraising after the deadline date left the outstanding amount at $68,263.51 to be divided amongst the town, region and province. That meant in the end, each level of government had to ante up $22,754.50. Halton Regional Chair Gary Carr says the Bronte Road widening will happen in the next few years. "We have the money we need, the tree is saved, and we'll now proceed," he said.

Some arborists have estimated the great white oak has a 90 per cent chance of survival with the new road built around it. The life span of a white oak can be more than 500 years.

By Joyce Burnell
Courtesy of the Oakville Beaver