H.M.C.S. Trentonian, one of the Royal Canadian Navy's corvettes was sunk recently by a torpedo from a German U-boat, it was revealed today. One officer was killed and five ratings missing. The Trentonian is shown in the above layout as she appeared last year while taking part in invasion operations off the French coast. At upper right is shown the ship's skipper, Lieut. Colin S. Glassco, Hamilton, who was among the survivors. A veteran seagoing officer, Lieut. Glassco had taken up his appointment as commanding officer just three weeks before the ship was torpedoed. He joined the navy in January, 1941. Upper left shows Leading Signalman, Jack Straw, R.C.N.V.R., also of Hamilton, who was another of the survivors. Also saved were Stoker William Shields, Oakville; A.B. Harold Salmon, Stoker Leslie Majoras and Leading Seaman Gordon Harley, all of Hamiliton, shown from left to right at the bottom. 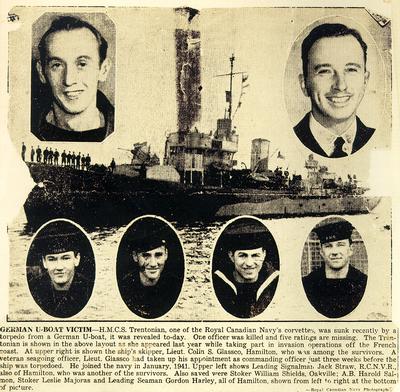