Enlarged Church And School For Oakville

During the past year the population of the expansive Oakville area has not mushroomed; it had puffballed. With the advent of a giant industrial plant, vast numbers of workers have migrated to this district.

One Catholic Church, St. Andrew's, which had an adequate seating capacity of 250 up until about one year ago, and one Separate School, St. Mary's, which was a two-room building, served this territoriality extensive area.

Rev. James A. Kirby, pastor, forseeing the skyrocketing population, arranged to double the church accommodation by construction of a large extension to the church. Additionally, four more classrooms were added to the school. It is increasingly evident that more church and school accommodation will have to be provided in the environs in the immediate future.

Rededicatory ceremonies for the enlarged church will be held Sunday, nov. 1 at 10:30 a.m. The liturgical ritual will be solemnized by His Excellency Most Rev. J. F. Ryan, Bishop of Hamilton. Following the ceremony of rededication , the Mass of Rededication will be celebrated.

The formal opening of St. Mary's extended school will also be held the same day. Although the school has net been completed, it is expected that one or two classrooms will be immediately available.

Construction on the school and church was carried out by the Arnold Construction Co. Geo. E. Billson, Hamilton architect, designed the additions. Consulting engineer was Geo. L. Schneider.

The church has undergone an extensive metamorphosis both interiorly and exteriorly. A stucco coating has been applied to the outer walls, which with their white faces has an almost new appearance. Additional roofing and belfry repairs have also been effected.

Formerly a one-storey, two room building, the school has taken on a new look. It is now a two-storey, six room structure. All modern facilities have been installed to result in an ultra modern building. Both projects were major jobs of renovation.

Father Kirby, the Separate School Board and the parishioners of St. Andrew's Parish are to be congratulated on their successful efforts to keep apace with the population increase in their area.

First Church There Was Built in 1831

In pioneer days, Catholics of the Oakville area received spiritual ministrations from priests from Toronto, Toronto Gore, Dundas and Hamilton. This continued until 1859. The old church was constructed in 1831. In 1855 the site of the present church was procured. The first pastor was Rev. J. Ryan (1859 - 1876). In those days, the Oakville parish served Burlington, Trafalgar, Milton, Milton Heights and the Beach.

During the past year this parish has experienced unprecedented expansion. The Catholic population has practically trebled. Not only has the church seating accommodation been doubled but an additional Mass has also been scheduled.

St. Andrew's Church, Oakville - Enlarged and facelifted interiorly and exteriorly, this church now boasts double the seating capacity. A large addition was placed to the rear of the church providing room for a new sanctuary. Pews have been placed in the section formerly occupied by the sanctuary. This major reconstruction job was effected by Arnold Construction Co. Rev. James A. Kirby is the pastor. (Staff photo by Bochsler)

Rev. James. A. Kirby has been the pastor of growing St. Andrew's Parish, oakville since 1950. Since coming here from Kenilworth, this parish has grown by leaps and bounds.

Father Kirby is a native of Arthur and is a graduate of St. Jerome's College, Kitchener, and St. Michael's College, Toronto. He received his theological training at St. Augustine's Seminary, Toronto, where he was ordained in 1917. Father Kirby celebrated his first Solemn Mass in St. John's Church, Arthur.

Following ordination, Father Kirby was appointed assistant priest of Sacred Heart Church, Hamilton, when it was established in 1920. Following this appointment her was transferred to Sacred Heart Parish, Kenilworth, where he remained for 12 years until his present appointment.

This popular lovable priest is a "Father Fitzgibbons" type of priest (Going My Way). His energy and leadership are spearheading St. Andrew's parish to keep abreast of the tremendous population increase and provide educational and church facilities for the rapidly expanding parish.

Father Kirby is to be congratulated on the way he has singlehandedly carried out his priestly duties in an area which is vast in territorial extent.

Preston - Rev. F. Marrocco, Secretary of the Social Action Committee of the Canadian Catholic Conference, will be the feature speaker at the convention banquet of the dioceasan PTA convention being held here, Nov. 8. Father Marrocco will speak on "Leadership through PTA".

In attendance at the convention will be a large number of Sisters of the various teaching communities in the diocese. Five hundred PTA members are expected to participate in the convention activities. Convention sessions will be held in St. Michael's School auditorium.

A feature of incalculable benefit to parents and teachers will be the two group discussions listed on the afternoon program. These discussions are entitled "Is Education from 9 to 4" and "Television is What You Make It".

Delegates from all over the diocese will be on hand. The Convention Mass is slated for 11.15 at St. Clement'S Church. Registration begins at 1 p.m.

Beautiful Interior of Reconstructed Church - Some of the beauty of St. Andrew's refurbished and enlarged church, Oakville, can be seen in the above photo by Bochsler. The seating accommodation has been doubled. A completely new sanctuary has been installed. Spacious sacristy space surrounds the new sanctuary. The enlarging of the church was made imperative with the recent meteoric rise in population in this area.

New Look, Inside And Out, For Old St. Andrew's Church

Exteriorly, St. Andrew's Church has a totally new look. The white stucco application, the roof renovation, the attractive contour of the new addition, all combine to ass dignity and beauty to a church which is almost 100 years old.

The extension now gives the building a cruciform shape.

With the beautiful, new sanctuary and the refurbished old section of the church, the interior has a fresh appearance. A complete job of redecoration has been effected in the old structure to match the soft grey tones of the walls and ceiling in the new structure. The sanctuary is a striking contrast with its pastel blue walls and ceiling. New hanging lanterns have been installed and have added to the beauty.

The altar is the liturgical table type with striking red dorsal drapes. Broadloom carpets line the sanctuary. Adequate sacristy space is now provided. A large priest's sacristy and an altar boy's sacristy are found at the sides of the sanctuary and are joined by a spacious corridor behind the sanctuary. The sacristies are well equipped with cupboard space, vestment cases and work tables for the sacristan's use.

Two modern confessionals, one at the rear and one on the gospel side near the front of the church, have been provided. Two side altars, of the Blessed Virgin and St. Joseph, are found at the front of the interior church. These side altars are simple yet match harmoniously with the rest of the beautifully furnished church. 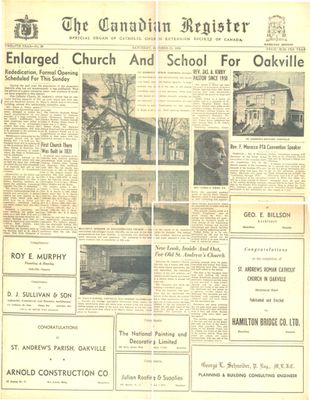