WAS TIME OF GREAT EXCITEMENT

'Twas back on August 17th, 1914, that the old town of Oakville was seized with excitement when eleven braves took train at our station en route to fight the pesky Hun, who had pitted his fist in the face of the Allies.

Flags were flying, the brand was playing and there was a long procession of cheering townspeople. It was a new experience. Young Canada new little then what a great war really meant. Some even thought the fuss would be over in a month, or three months at the longest. But in succeeding years Canada learned much.

However, be it long or short, Oakville boys and Oakville people were determined to do their share in seeing it through. They set at their task with teeth set, and with mind keyed to meet whatever might be ahead - and win.

In the procession were the band, the fife and the drum band, the Souts, and the firemen. The crowd was estimated at two thousand. Flags were everywhere.

In the Trenches in Februray

The first contingent boys when that afternoon with Col. F. H. Chisholm to Georgetown. there they remained four days, and left under Col. Ballantine for Valcartier in Quebec for mass training. Five weeks later they sailed for England and trained on Salisbury Plains till Fed. 8th, 1915, and our boys entered the trenches in France on Feb. 17 to experience initial fire. 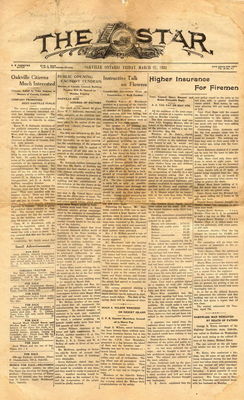