At last I have got down here for my leave in “Sunny Italy” only just now it is far from that and is pouring figuratively cats and dogs.

We spent yesterday in Rome and made excellent use of our time. Saw St. Peters but on account of sanitary reasons failed to kiss the toe of St.Peter. However there were plenty others ready to do it so I don’t suppose he missed us very much.

The tomb of St.Peter is in the very heart of the church under the great altar and pulpit where the Pope comes and says mass once a year. Some of Michalangela’s finest sculptures and mosaics are in that building. St.Peters is huge and massive and awe inspiring but I feel quite positive if I could see San Marco in Venice uncovered of her sandbags it would appeal to me far more.

Then we went for a drive out on the Appian Way, straight as the crow flies toward Rome’s ancient port. There are many interesting places and tombs on it but the most interesting of all is the “Catacomles of Calixyus”. We didn’t have the time to go in. We also saw the “Quo Vadis church built on the spot where Christ appeared to Peter when he was fleeing from Rome.

The Colosseune and forum are wonderfully interesting and remind us of the glory and grandeur that was Rome’s I stood down in the arena and when I thought of the horrible and thrilling things that took place there even after all these centuries it made me shiver. The vast number of cells and passages underground and beneath the tiers and tiers of what once were seats must have often been filled to overflowing.

I can imagine Nero sitting in his box at the most advantages point with the Roman crows around him anxiously waiting while the early Christian martyrs were brought out and the lions turned loose on them. Now all that is over. That particular kind of killing is as antiquated as the building in which it took place. It has been superseded by the much more modern and effective way of shooting down masses of men with guns and suffocating them with poison gas and dropping bombs on innocent and inhabited cities. I don’t know which was worse. Let is suffice that both are and were bad enough.

The forum is filled with bases of pillars and broken down buildings and lonely little bits of carving collected and piled up. It must have been there that Mark Antony delivered his famous speech over the dead body of Ceasar. Then just above it are the palaces of the Ceasars on the Palatine from which they could look down and direct the world beneath them.

All these places swarm with guides who have a smattering of English. We got stung once at St.Peters but never again, (at least not there). They come and cling to you like a leech and try to sell you postcards or take you to a hotel you don’t want to go to. In the Hotel here at Naples the porter, waiter and two or three others speak a smattering of English.

This is a lovely place and out room looks out over the bay to the dark dark rock of Capri where we are setting out for this afternoon. The porter tells us it is very rough for the trip, but I have gone camping in rougher weather and we are not going in a canoe.

I will write from Capri more fully etc, we expect to spend at least a week there and see a few more places on our way back. 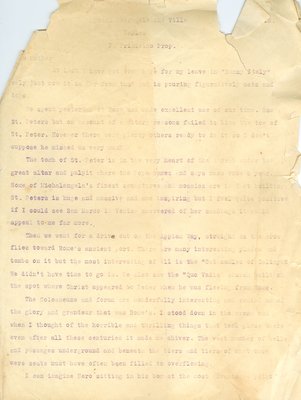