Croce ROssa Britainica No I

I have just received your letters written Xmas and New Years and what a fine time you must have had at the Bridgeman’s and I am so glad to hear that Gyppy was such a good dog and appreciated her present so much.

Pearl informed me of the change at Vaughn. I had a letter from Aunt Nottie telling me much the same things It will be very nice for them and fancy how busy they will be. It was very kind of Mrs Howe to remember me. I must write her and send some sort of Italian curiosity.

Tell Pearl that her letter of Dec. 24 sounded a little like the one Pearl said he got from S. and T. so many people were either killed married of feeling miserable in it. Never mind though all those details are interesting as well as any others.

Your Xmas festivities sounded wonderful. I only wish I had been able to send you all something, but about the time to be thinking of it there was so much to be done here, and the risks are so great. The limericks were wonderful and showed how clever my relations are.

Feb. 10. Well I have had a wonderful day. I never imagined five months ago that someday I would run over to Venice like we would think of going to Toronto, but the unexpected has happened and I spent four delightful hours today in that historic place.

The Italian Captain with us had some business in Mestre which is about7 miles from Venice by ferry and I had to take him. Two other chaps Mr. John Yates and Mr. Hudson went too. Having concluded the Captain’s business we departed at 12 o’clock on a little ferryboat about as big as those that run on Hamilton Bay.

We reached Venice in about a quarter of an hour and after sailing up the Grabd Canal landed a few steps from the “Rialto”.

Feb 12. I nearly fell asleep after the first part of this epistle and have not had time since to finish it, but here I am again and am going to try and set down a few things.

There are two rows of shops all up the Rialto and in these strenuous war times they are all closed and in that famous spot which long ago corresponded to New York’s modern stock exchange everything is quiet and sleepy. It is a long time since Antonio railed as Shylook on the “Rialto” but the bridge has stood the years and elements and will continue to stand for yet more centuries.

We walked from there to the main piazza which is at the centre of the city and of all interest for the tourist. At one end stands St. Mark’s and the huge campanile. In 1693 the campanile fell down. Just collapsed in it’s own space and now there is built it’s exact counterpart only in modern brick and stone.

On either side are palaces with rows of shops under the arcades on the first floor. Little cafes are there also with tables and chairs. Although it is Feb. it is so warm that no one thinks of staying indoors any more than is necessary.

Looking towards St. Mark’s and to it’s right just out of the square stands the Ducal Palace on one of the finest pieces of architecture in the world and the wonderfully historic place where the medieval dukes and courts of justice sat and ruled old time Venice. We saw the little letter box in the wall where any one might drop a note anonymously accusing any of anything and there was always a result.

It is wonderful the steps that have been taken to preserve the building from chance raids etc. The arches are all supported by brickwork and beams. A famous stair is covered with sand and all the famous painting which adorned ceilings and walls have been taken down and sent to places of safety.

St. Mark’s is wonderful but one cannot see it to advantage in these days. It and St. Sophis in Constantinople are the finest example of Byzantine architecture and it is sandbagged to perfection. The whole front is boarded up and filled with sandbags. The pillars and statues and pulpits inside are sandbagged and the mosaics and paintings on the walls are covered with canvas. The ceiling however is left and it is marvelous. The whole of the bible history is portrayed in many coloured mosaics on a dull gold background. What an amount of work these ancient churches have taken in the building and how well worth it they are. I was in a modern on the other day and everything is so much gilt and gaudy that I don’t see how people can like them.

The famous horses of St. Mark’s have been taken down and sent to Rome for safe keeping during the war, so we did not see them.

The famous “Bridge of Sighs” was just as pictured in many postcards etc. with it’s little square windows through which many a poor prisoner has gazed his last on the sunlight and canals of Venice.

Along the Piazza run the Grand Canal with rows of Gondola’s for hire on the edge. We hired one and journeyed down the canal to our boat. What a wonderful thing a gondola is and how picturesque the men who row them. They are all painted black by order and they sail up and down at less than the rate of a canoe.

There are wonderful palaces along the canal with their front entrances facing it and steps down to the water. Many of them are now used as naval hospitals and we saw one hospital barge. The colors are magnificent and one who has not seen them has no idea of their variety and how perfectly they blend together.

We left Venice at four o’clock and it faded into the distance as we seamed over the big lagoon between it and the mainland. What a shame and pity it would be if the enemy bombed Venice. Padova and the neighboring towns and cities are bad enough but Venice would be worse than all. Fortunately in the present offensive nothing like that has taken place and I don’t think it will. We dined in Padova and returned to the villa in as dense a fog as I have ever been out in simply horrible to drive through. Luckily there was nothing in the road so I got home safely enough after one of the most pleasant days I have ever spent.

I am reading Gullivers travels in Italian, I have done six pages in my spare time in two days so there is some hope that some day I may finish it.

Tomorrow the cars go back to new outstations after two weeks “holiday” (I don’t think). I have been promoted from the Ford to the car that Paul used to drive and I am going to one of the outstations to drive Mr Percival who will be in charge there. I don’t expect I will be so very busy for a while now so I will have a little chance to plug Italian, so far the chances have been nil. Three separate times we have started Italian classes and three time we have gotten to the eighth less of Hugo and no farther.

I went to the British army ordinance department today and got rid of some money. I got a new pair of breeches for one thing. The pair I got from Babb were the most highly unsatisfactory things I ever had the misfortune to own, for the past months they have been continually splitting in the most unlikely places and the knees are almost worn though, I shall never get anything from him again. Well the breeches I got are extremely ugly, not cord but a kind of rough surge, however they only cost $ 6.00 and are better than nothing. I am going to send to England for a classy pair before I go on leave. Then I got a nice little woolly jacket to wear under my tunic, two towels, a couple of ties, gloves, and a pair of leggings and I didn’t spend more than 15 dollars, not so bad eh?

This is the twelfth of February and the snowdrops are out on the hills near us and pussywillows and poplars have been out a couple of weeks. What a wonderful country it is that had a climate to do that and it is as rich as our prairies and so densely populated.

I don’t know when Bill and Wilf are coming back from leave, they have been away more than three weeks already so I suppose will soon be thinking of it. I haven’t thought much about leave yet but think I will save it up until I know a little of the lingo or get terrifically bored with the work. It is always nice to have a little leave in reserve.

Well I think I will close for now. It is about time to wish Dad many happy returns of his birthday. March 9. Is it not? This will be a trifle late but tell him to remember I am always thinking of him. I do hope 1918 will be a prosperous one for you all and that before 19 comes around these European people will see the error of their ways and put an end to the huge game.

With much love to you all. 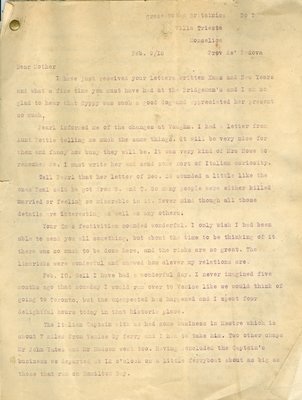