Oakville History Makers
Oakville History Makers
Main Menu → Previous Panel
That Small Town Feel
Panels
Oakville is a Special Place . . .Growing Up in OakvilleSoftball in the Summer, Skating in the WinterA Genealogist RemembersFrom Ireland to The Oakville ClubRoots in BronteA Journey Down Three Memory LanesThat Small Town Feel
BRENDAN & MAGGIE SAUNDERS
Interviewed by Mark McCready (Age 10) and Shannon McCready (Age 7) My Grandpa’s name is Brendan Saunders and my Grandma’s name is Maggie Saunders. Grandpa was born in Norris Arm, Newfoundland and Grandma was born in Lethbridge, Alberta. They got married in Alberta and moved to Oakville twenty-five years ago, in 1989, from Edmonton. They lived in College Park, near Sheridan College and are still living there in the same house. Grandpa says that since he moved to Oakville, it has gotten a lot bigger. There were about 100,000 people living in Oakville when they came here. There are now more than 300,000. There is currently a lot more traffic and people than there used to be.

When asked if there were any family stories about Oakville that they would like to pass down, both my Grandma and Grandpa said that they liked when my family moved back to Oakville, because there was more family around. They like when we have family reunions with our immediate family in Oakville. Grandpa thought that it was interesting that although none of their grandchildren were born in Oakville, they were all baptized here.

We asked Grandma and Grandpa what it was like in Oakville when their kids were our age. It had a small town feel to it even though it was close to Toronto. It was cold in winter and there were lots of things for kids to do. When Grandma and Grandpa moved here, three of their kids went to St. Michaels Elementary School and my mom went to St. Ignatius of Loyola High School. On a typical day the kids caught a school bus, were gone all day, then came home and did homework.

When all of the homework was done, they went to bed. When there was no school they liked to do lots of things with their family and friends including camping, hockey, skating and playing board games. They were also involved in lots of community organizations including hockey, scouts, girl guides, bridge clubs, and Knights of Columbus.

Grandma and Grandpa say that one of their favorite places in Oakville is Bronte Harbor. It has changed a lot since they moved to Oakville. It used to be quaint, but is now commercialized. Small houses have been replaced by condominiums. Their favorite restaurant, Tartan Fish and Chips, is still around. They also like Cynthia’s Chinese Restaurant. I like when we go there with them. They also like the festivals, including Midnight Madness and the Jazz Festival, that still occur downtown. They also talked about enjoying the Oakville Waterfront Festival, but it stopped about three years ago.

My grandparents' best memories of Oakville are the mild winters. They also like Thanksgivings because all of the family would come and there would be a big gathering. Christmas was also a time when everyone came home and went to mass, and then shared dinner and spent time together.

I am glad that my Grandparents moved to Oakville, and that I have moved here with them. I love my Grandma and Grandpa. 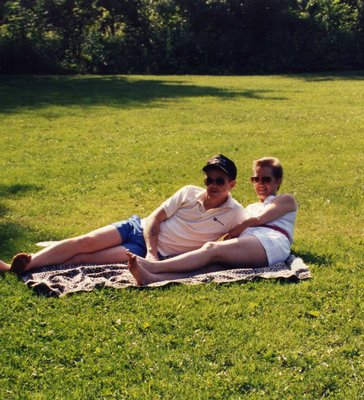 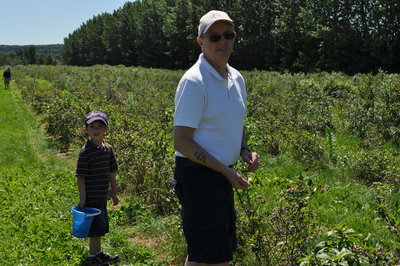 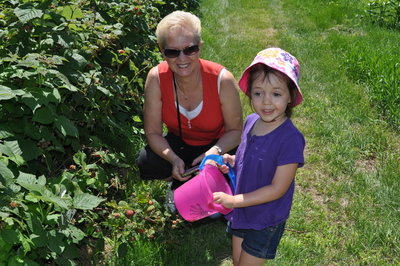 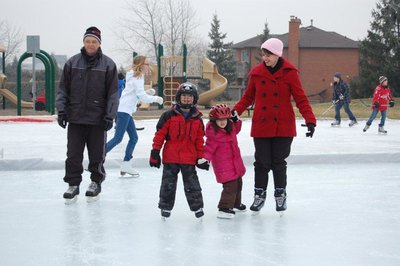 Details
Mark and Shannon McCready go for a skate in College Park with their mum, Elizabeth, and their grandfather, Brendan Saunders (2010) 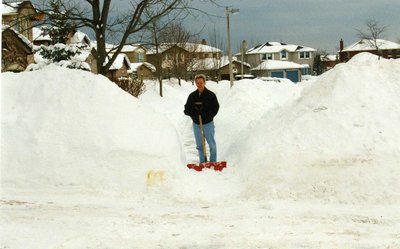 Details
Brendan Saunders in his driveway following a massive snowfall (1999) 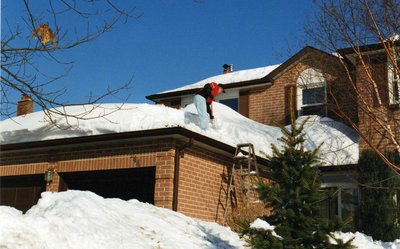