Full Text
Fifty years of beautifying Bronte
Inflation may be everywhere, but it hasn't hit the Bronte Horticultural Society.
In 1939, 14 years after the society was founded, members paid $1 in dues. Now they pay $1.50.
As the Bronte Horticultural Society enters its second half century, one member has undertaken to write the group's history.
Mildred Kennedy of Ulster Dr. has been researching the society's history, but admits some periods are murky.
It's like a jigsaw puzzle, I'm trying to fit in the bits and pieces," she said.
The Bronte Horticultural Society was chartered on March 25, 1925. Mrs. Kennedy suspects many of the original members were wives of area farmers who met to stage informal horticultural competitions among themselves.
OFFSHOOTS "Horticultural Societies are offshoots of agriculture," she said. "The Ontario Horticultural Department which is a branch of the Ontario Agricultural Department, probably paid the original members' dues."
"In the days when the Society was founded, Bronte was not part of Oakville," Mrs. Kennedy said. "It was the only horticultural society in the area and a lot of Oakville people belonged to it. When the area got built up the people from the east applied for a charter and the Oakville Horticultural Society was founded in 1956."
"We have some very talented members and now some of them belong to both societies."
At the recent annual meeting, the executive for the 51st year was elected. Elected officers are: A.J. Cox, president; Dorothy Mitchell, first vice president; A. Melia, second vice president; Eileen Melia, secretary; Robina Andrews, Maureen Barber, Evelyn Bolton, Win Greenwell, Roy McBurney, Sheila Butler, Marie DeFields, Poccina Hinton, Mildred Kennedy and Nora Leeming.
During her research Mrs. Kennedy has found out that many prominent members of the Bronte-Oakville community have served on past executives. They include Clayton Rayburn, G.V. Colins, Mrs. P.H. McKim, W.H. Cudmore, A.O. Flumerfelt, Mr. and Mrs. Dan Wilson, Ernie Belyea, and Charlie Warner.
In fact, Mrs. Kennedy noticed that early membership lists read like an Oakville street directory with names like Cross, Lees, Jones, Speers, Jennings and Allan.
MEETINGS The Bronte Horticultural Society meets in St. Hilda's Anglican Church, 1258 Rebecca St. on the third Monday of each month at 8 p.m.
The group will have a table at the Hopedale Mall Charity Bazaar on Thursday, May 27. Te table will feature a plant table and a white elephant.
"The idea behind the Horticultural Society is to get people interested in keeping their neighbourhoods up." Mrs. Kennedy said.
Mrs. Kennedy has mended the thick, old black membership book.
"It's very interesting to go through the minutes. It's amazing to think they had so many members (about 72) during the war years. The society really did very well."
Mrs. Kennedy would be happy to hear from anyone who can give her further information about the past days of the Horticultural Society. She hopes to make a book of her compiled information.
If you can shed some light on the Bronte Horticultural Society's past, call her at 827-3951. 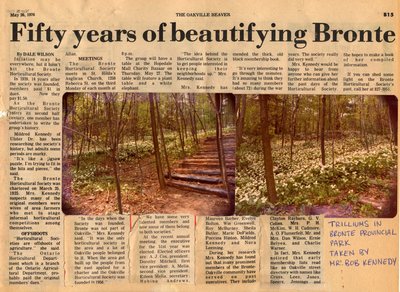