Media Type
Image
Item Type
Photographs
Description
Jennie's family had come to Oakville, Trafalgar Township in 1840 from Ireland because of the potato famine. Jennie was a singer and met Jack through their church. As a young groom, working for the Gerard family of Garswood Hall, Ashton-in-Makerfield, Lancashire, he had driven the family each week to church services and become Roman Catholic himself.

In 1910, Jack came to Canada at the request of Mr. Herbert Cox, to manage the family stables on their estate on the Lakeshore Highway in east Oakville, (Trafalgar Township at the time). A British trained horseman, Jack was responsible for the family riding horses, the polo ponies and field, the carriage horses and hunters.

He joined the 9th Mississauga Horse and then the 4th Regiment Canadian Mounted Rifles during World War One and served as an officer servant/batman (a similar job to that of the Boer War) for Captain Kenneth Marlatt of Oakville, a relationship of friendship that lasted their lives.

Jennie and Jack's son, Paul, was born during this time on the Cox estate.

After 1924, Herbert Cox was in Canada at the estate only during the summer. Jack had the opportunity to move to manage the stable of Charles Howard in Greenwich, Connecticut, where daughter Joan was born. Mr. Howard was Master of the Hunt for the area. The work was with hunters and the family's pleasure horses.

The Moulding family returned to Oakville in 1937, when Joan was 11, because Jack's health was declining. 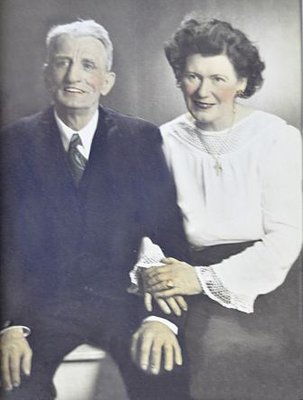