Several bridge structures have probably spanned Twelve Mile Creek, now Bronte Creek, at Dundas Street from the early part of the 1800s onwards. The bridges were located at the bottom of the steep valley. A c1850 map by Major Baron de Rottenburg showing the principal communication roads in Canada West depicts Dundas Street as an improved road with a bridge over Twelve Mile Creek. Around 1885, a low-level steel truss bridge was built at the bottom of the creek valley and was in place until 1916.

Since the creek banks at the crossing were very steep and the approach to the bridge dangerous for vehicles, particularly in wet weather, a small cable car was operated on the east bank in the early 20th century to transport passengers to the road above while their vehicles crossed the bridge below.

TTHS Inserted Information: Facebook discussion in April 2020, yields the information that, "it was decided during World War I to take the low-level bridge out of service. The road alignment leading to the valley floor was crooked and narrow, and was therefore not very suitable for motorized traffic."

A historical photograph, dated March 1919, shows the 1885 metal truss bridge moved off its stone abutments and severely damaged after a flood.

TTHS Inserted Information: it was in 1919 that municipalities all along Dundas voted to have it declared a provincial highway rather than a regional road with varying standards.

Construction on a new high level bridge structure to improve the steep and poor road alignment leading down to the creek valley floor began in 1916. Under the direction of Norman McLeod, Ltd., Engineers and Contractors, of Toronto, the bridge was completed in 1920 for Nelson Township (Appendix: Historical Photo). A Department of Highway (DHO) Annual Report describes the 1916-20 high-level structure as follows:
"This bridge [1948] replaces a bridge which was started in 1916 before Dundas Street was even a county road but which before the bridge was completed in 1920 had become successively a county road, then provincial county and finally a provincial highway. The new bridge eliminates the kinks and grades in the road at this point.

It may be of interest to note that the old bridge superstructure was built out of wrought iron spans, which were removed from the Intercontinental Railway and which had been manufactured in England."

Dundas Street was assumed as a Provincial Highway in July 1920. In 1925, it became part of Provincial Highway as King’s Highway No. 5; the highway was completely paved in the same year. The Department of Highways (DHO) replaced the 1920 structure on Highway 5 in 1949. The piers of the older bridge were left in place and a deck truss replacement bridge was built.
Notes
This area is known as Tansley, and the older bridges were often called the Tansley bridge.

The 2008, revised 2010 Halton report is linked here for your further information. 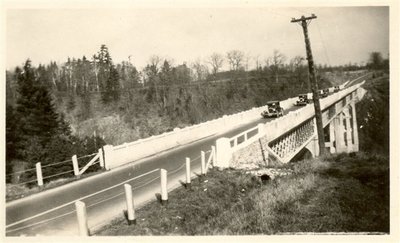