Media Type
Image
Item Type
Photographs
Description
The community of Palermo started as early as 1806. By 1835, the town had developed enough to boast its own post office, churches, schools, stores, blacksmith and surrounding mixed farming. The active community started the Palermo Sons of Temperance in 1850 and this group was the genus of the community hall.

The last "Palermo Public Hall Corporation" building (as the hall was legally called) was built in 1912 on Lot 31, 1st Con SDS. The building was totally funded by the people of Palermo and the events held in it - no government money aided the Hall. The Hall saw many social, sporting, political, religious events over the next 61 years.

In 1973, the building was demolished to widen Bronte Road. To commemorate the old Hall which had been the hub of Palermo for so many years, there was thought of building a gazebo.

When the cornerstone of the demolished building was lifted, it held a surprise. On the back of the stone, it was carved with the death date and misspelled name of Mary Inglehart. The Tweedsmuir History scrapbook has a newspaper clipping about this, as people thought that the stonemason's error ("Ingelhart") meant he had to redo the gravestone for the family, so his shop later used the stone for a purpose where the error was not likely to be seen.

In the Hall, a plaque honoured Mr. Henry Heeks and another was a Trafalgar War Memorial Plaque. A commemorative "WWII Honor Roll of Palermo Volunteers" also hung in the Hall. Another plaque was prepared, perhaps to be used in a gazebo commemorating the Hall, and it says, "This building erected from the proceeds of Palermo Community Hall 1912 - 1974". As well, the flag pole of the Hall, which was erected in memory of Dr. Anson Buck, is visible in this photograph by the window on the left. All of these items are now displayed in the collection of the Trafalgar Township Historical Society at the old, one-room schoolhouse in Palermo and photographic records of them can be found by searching further in this online collection. 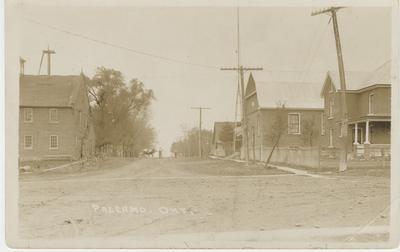