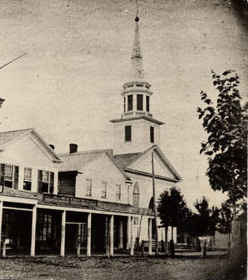 Wesleyan Methodist Chapel OHS #130 Details
The Wesleyan Methodist Chapel was built in this location on Colborne (Lakeshore Road) in 1835. As the Methodists were unable to afford its upkeep, it was sold to the Anglican Church and named St. Jude's in 1840. On the left in this photo: W.H.Young "Cabinet Making and Undertaking." St. Jude's then built in its present location on Thomas Street 40 years later. In the new St. Jude's, citizens paid a nickel to go up in the tower as it was the tallest building in the Town. 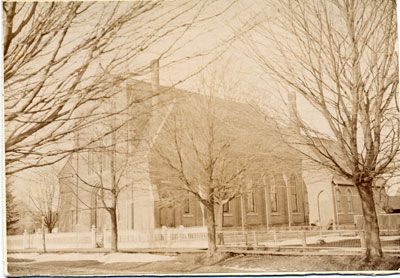 Methodist Church OHS #666 Details
This Church was formerly Wesleyan from 1851-1878. It then became St. John's Methodist, and is the present day St. John's United. It is located on the South East corner of Dunn and Randall Streets at 262 Randall Street. 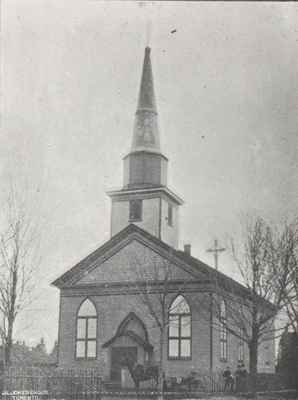 St. Andrew's Roman Catholic Church OHS #89 Details
St. Andrew's Church was built in 1847, and is located at the corner of King and Reynold's Streets. It is interesting to note that in 1841, the total population of Trafalgar Township was 4,375, of whom 1,098 were Anglicans, 1,007 Wesleyans, 963 Presbyterians and only 281 Catholics, and yet still St. Andrew's was built. It is the oldest surviving Church in Oakville still in its original form. 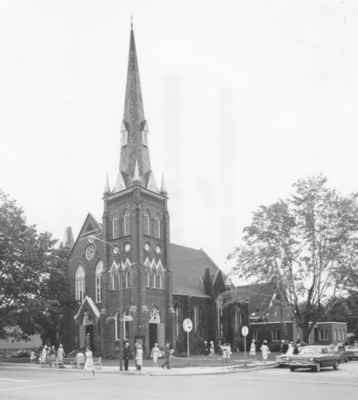 African Americans had arrived in the Oakville/Bronte area as early at the 1830s. With the passing of the American Fugitive Slave Law of 1850, a significant increase was noted in the number of former slaves leaving the northern states and following the North Star into Canada West (Ontario).

The cornerstone for the building was placed in 1891 and on January 1, 1892, the doors of Turner Chapel A.M.E. church were flung open for service under the leadership of Rev. William Roberts.
Search Again → Previous Page → Next Page
Powered by / Alimenté par